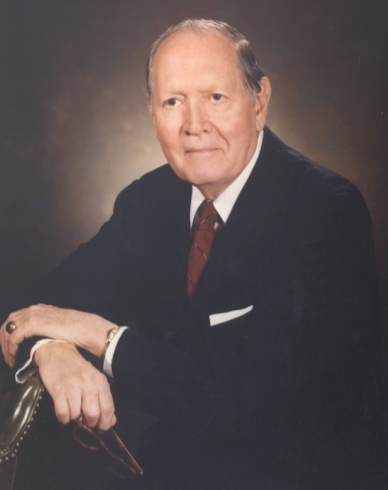 A native of Washington, DC, Dr. King attended Georgetown University and Georgetown Medical School, receiving a degree in Medicine in 1933. After his residency, he served 20 years as an ophthalmologist in the US Army, spending most of his peacetime active duty in Hawaii and Washington. During World War II, he served both in Europe and the Pacific. He retired in 1955 from his post as Chief of Ophthalmology at Walter Reed Army Medical Center.

He was a dynamo. His boundless energy and innovative mind involved him in several careers simultaneously. He became a corneal surgeon of international repute and conducted a very successful private practice in Washington, DC after his retirement from the Army in 1955. While serving in the Army's Ocular Research Unit at Walter Reed, he devised a process for preserving eye tissue that involved dehydration and storage in glycerin in vacuum tubes.

The corneal tissue this process provided let to eye banking and soon the banked corneas were being shipped throughout the world. Being the humanitarian he was with teams of corneal surgeons, he organized repeated expeditions to remote areas in the Pacific, Asia, South America, Central America, Africa, and the Middle East. he quickly became known to most ophthalmologists in these areas because his expertise and banked corneas were the only hope for preventing blindness in a large percentage of their patients.

Dr. King founded and directed many professional organizations. First, he worked with The Lions Club of the District of Columbia and founded the Washington Eye Bank, then the Eye Bank Association of America, next the International Eye Foundation for which he remained Medical Director from 1961 until shortly before his death. IEF was his labor of love for he was at his best while applying his charming and persuasive manner to attract government and private funds to support a global organization. He utilized many ophthalmologists on station in remote areas totally dedicated to preventing blindness.

He was a founding member of the Board of Care-Medico, the former medical arm of CARE. He also founded and directed The Society of Military Ophthalmologists which is still active today

Despite all these many accomplishments, he wrote more than 100 scientific papers and 4 textbooks. His international stature is attested to by his position as a Knight of the Order of St. John of Jerusalem which supports the St. John Eye Hospital in Jerusalem. He was also a member of the Knight of Malta.

In 1982 he received the Distinguished Humanitarian Award from the Pan-American Association of Ophthalmology. He was the recipient of the Frances J. Garner Memorial Award from the Lions District of the Washington Eye Bank.

Few will leave the legacy, Dr. John Harry King, Jr. left as a diplomatic benefactor from the United States who really made an impact on preventing blindness for many of the world's most unfortunate people. But the Board of Directors and global staff of the International Eye Foundation contine Dr. King's legacy by helping people see around the world.