Our flagship program to strengthen eye hospitals in the developing world comes out of our vision from 1999 recognizing that 90% of the causes of blindness need treatment by a qualified ophthalmologist with a functioning hospital and modern technology. These should be available, accessible, and affordable to all of the people they serve.

In 2000, IEF identified seven eye hospitals in six countries worldwide that had a commitment and capacity for change (now 66 in 22 countries worldwide). Over the years, various clinics and hospitals have accepted our investments and technical assistance for management training, restructuring of processes and procedures, quality and efficiency measures, sustainable financing, revenue generation, and cost reduction.

A pioneer in Mectizan® distribution 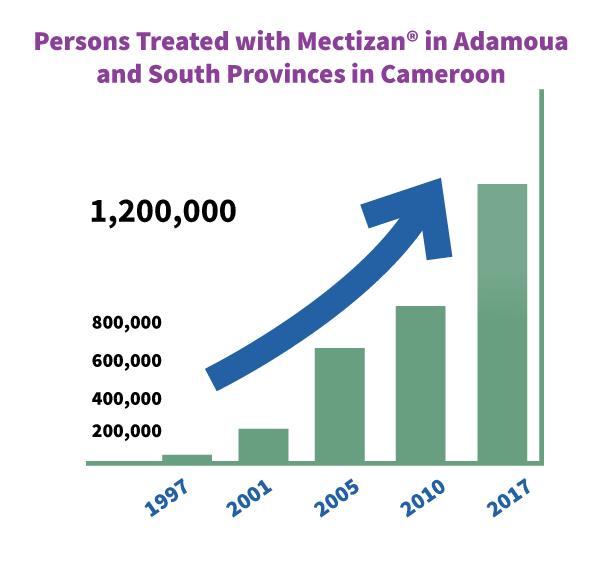 Onchocerciasis, commonly known as "river blindness," is found mainly in sub-Saharan Africa. Microscopic worms deposited in the body by the bite of the "Black Fly" multiply by the millions. Some migrate to the eyes and cause severe inflammation and blindness. Onchocerciasis affects all ages, but blindness occurs in the 30's and 40's, the most productive years. A small tablet known as Mectizan® (ivermectin) given just once a year kills the microscopic worms and prevents blindness.

Having pioneered Mectizan® distribution in Cameroon in 1992, IEF continues to support the programs in Adamaoua and South Provinces working closely with the National Onchocerciasis Task Force and with support from the Lions Clubs International Foundation. In 2017, 1,145,752 persons in 1,665 villages were eligible for treatment and were treated with Mectizan® to control Onchocerciasis.

With a sub-grant from Helen Keller International’s ENVISION program, 1,140,296 people received Albendazole, and 433,074 school children received Mebendazole and/or Praziquantel in 2017 to treat other worm infestations. The elimination of worms in the body leads to better health, prevents malnutrition, and leads to greater energy.

The World Health Organization (WHO) recommends treating Onchocerciasis with Mectizan® at least once a year for 10 to 15 years.

We continue our commitment to saving sight