As of September 7th, an update was released from OCHA regarding the rebuilding stemming from the destruction left by the 7.2 magnitude earthquake that hit Haiti.

Here is a recap of the event and what has unfolded between IEF and partners in the area.

At 8:30 am (GMT-4) on August 14th, a strong, shallow earthquake rocked southwestern Haiti just 12km northeast of Saint Louis du Sud, about 125 kilometers west of the capital Port-au-Prince. The 7.2-magnitude quake, which was 10km deep, toppled buildings and homes and damaged infrastructure and roads, cutting off access to some roads in the southwest, such as national road 7 (RN#7), which connects Les Cayes and Jeremie, and forcing many to flee their homes in fear that they may collapse. [OCHA Haiti: Earthquake, Flash Upload No. 1, August 15, 2021] 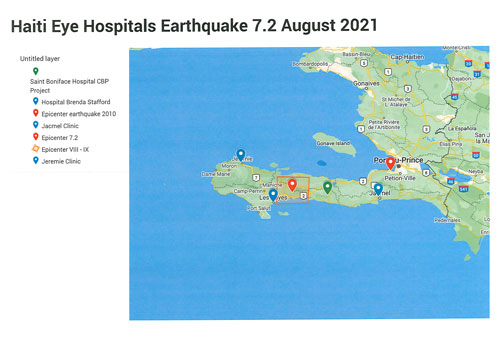 Email messages were distributed as soon as the news was received to representatives from FOCUS Inc (Dan Alter and Bill Myers) and Bay Eye Charitable Foundation, (Anshu Chandra and Marty Arkin) on Saturday, August 14, 2021, at 18:18 to inquire about the possible impact of the earthquake on CBP project personnel and hospitals.

In response, reports indicate that the Brenda Stafford Hospital and eye department closest to the epicenter were not damaged. The Hospital Saint Boniface where the BECF CBP project is located reported minimal damage but near-normal activity. The staff was safe but understandably nervous sleeping outside because of the aftershocks. Dr. Marcelus, an attending ophthalmologist at HUEH, was in Jeremie at the time but has returned to Port au Prince and is safe. Minor damage was reported in Jeremie.

Both Jeremie and Hospital Saint-Boniface experienced tremors that reached magnitude VI on the Modified Mercalli Intensity Scale (MMI), capable of causing damage to buildings. There were no reports on emergency eye care needs as a result.

The program closest to the epicenter is a project implemented by Bay Eye Charitable Foundation supporting the eye department of the Hospital Saint Boniface in the town of Fond-des-Blancs. This is a child blindness project. Other programs IEF supports were not affected by the quake in Les Cayes. The Hospital Brenda Strafford was affected closest to the epicenter and has reported damage. Although IEF does not directly support BS, the hospital is part of the Haiti Vision Alliance that we work with.

You can also read Haiti: Earthquake Situation Report No. 4 from OCHA, released on September 7th for updated information on the situation and rebuilding efforts.

As numerous world events have unfolded since the earthquake in Haiti and this event has cycled out of the mainstream media, do not forget that the rebuilding process continues and assistance is still needed for those affected.